Grown as a specimen tree, and for architectural and winter interest.

Want to find Cedrus deodara at Reveley?  Look to the far left hand corner of the main lawn where our specimen dominates the area between the Rose Garden and Mulberry Tree beds.

Cedrus deodara is a magnificent tree with a beautiful growing habit.  Pendulous branchlets grow out from the horizontal branches giving the tree a romantic weeping appearance.

The Cedrus has long needle like leaves bluey green in colour which are tempting to stroke.  Tightly closed egg shaped female cones, up to 13cm in height, stay on the branches until they eventually break up to release their seeds.  The male cones are smaller and shed their pollen in autumn.

At maturity it is a large tree in excess of 20 metres high, therefore it would only suit a large garden; many specimens can be found in local parks.  Deodara’s need space for their growth habit to be appreciated. Alternatively, Cedrus deodara ‘Aurea’ is a medium sized tree to 12 metres high, with the same pendulous growing habit.  ‘Aurea’ has bright golden leaves which turn greenish yellow by autumn.  Perfect for brightening any dark spot in a garden.

Cedrus deodara require very little pruning – and any pruning can dramatically change the overall shape of the tree so be careful.  Apart from the removal of dead branches, if you do need to prune it should be during the main growing months May and June.  If a thicker growth is required you can snip off the terminal buds.  And, as with many conifers, Cedrus deodara will not regrow past the point of its green growth.

Generally, pest and disease free, although the tree can be susceptible to Honey Fungus.  Propagate by seed or semi hardwood cuttings.  The Cedrus needs full sun and good drainage.

The Cedrus deodara is the national tree of Pakistan.  As well as Pakistan, it is also a native of the Western Himalayas and India.  A forest of Deodara trees is called Darukavan and they feature in many of the ancient Hindu texts as they are sacred places.  The name deodar comes from the Sanskrit word ‘devdar’ which means ‘timber of the gods’.  A magnificent specimen tree which should be treated with respect. 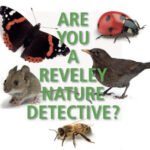 Try our new “Nature Detectives” nature trail and discover the creatures hidden around the gardens. Find out more >