Reveley Lodge has been linked with the art world for many years – past owner Albert Chewett, a painter, was a pupil of Hubert von Herkomer.

The conversion of the old carriage house in our Victorian stables was made possible through a generous private donation and a grant from Hertsmere’s Community Infrastructure Fund.

The Gallery will re-open to the public on Tuesday 13th April with a new exhibition by local artist Martin Langston:

I was born right at the start of the 1960s. My family worked in the print industry (Watford was a big print town back then) and comics printed at Odhams Press, where my grandfather worked, found their way into our family home in Chipperfield. They were Power Comics called “Pow!”, “Smash!” and “Wham!”. I couldn’t put them down.

I asked my Dad if instead of my shilling a week pocket money could I get a comic delivered with the newspaper. This led to the Beano and the Dandy being read by me and my brother. There were loads of different comics being published and we changed titles regularly. We worked our way through nearly all of them. Beezer, Topper, Sparky, Whizzer and Chips, Cor!, Knockout and Buster. I was starting to become a bit of a comics aficionado. For instance, I noticed that whoever it was that drew Dennis the Menace in the Beano was also drawing Corporal Clott in the Dandy, and Beryl the Peril in Topper. I began entertaining an idea that I might like to draw comics for a job when I left school…

That led me to the Watford School of Art in the late 1970s to try and learn how. They endeavoured to teach me how to draw and paint there, but I also learned something else. I learned about Pop Art. There were actual artists painting pictures from comic books on canvas and they were hanging in proper art galleries…

I never did draw comics as a full time job, but I became a graphic designer and an illustrator and I had contributions accepted and published in Viz and other “adult” comics that started to appear in the early 1990s. I eventually left the graphic design business as it was creatively unrewarding, and I settled down into steady office work as I became a husband and a father.

Recently though I started to scratch the creative itch and began painting. I am led to believe that my work comes under the heading of “Contemporary Post-Pop Art”.

I have a USP of sorts: With the exception of brushes I have rejected most of the traditional materials artists favour. I use household paint (the emulsion you might paint your bedroom walls with) not oils or acrylics and I paint on hardboard, MDF or plywood not canvas. Either that or I cut up and staple drinks cans to create my art.

If you are interested in exhibiting in the Stables Gallery in the future, please email info@reveleylodge.org or phone 0208 950 1017.

Latte Art is currently offering a takeaway menu with hot and cold drinks, cakes and pastries, toasted sandwiches and croissants. Please see their website for full menu and prices.

Support us to help maintain Reveley Lodge for current and future generations. Find out more > 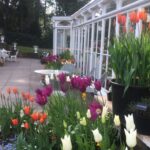