You may have heard already that I have handed in my notice and am off to become a man that visits and sits in gardens rather than working in them. On the morning of the 17th of September 1968 I opened the front door of my family home where 17 years previously I had been born, cycled 300 yards down the road, turned left into the park and then right entering the local authority parks department nursery, and began my horticultural adventure. In those days parks departments were at the top of the league of good horticultural training and opportunity, and this nursery, as well as propagating and growing all of the bedding plants used throughout the borough, also had a vast collection of exotic potted plants and trees used for floral decoration for civic functions, school prize days etc.

When Heseltine and Thatcher swept my future parks career away I left and joined the private gardening sector where skill and good horticultural practice were still encouraged and where I have worked ever since.

At Reveley I have strived to provide visitors to the gardens a restful and enjoyable environment away from the daily hubbub of life, in which, if they care to look more closely, they will notice many interesting and unusual plants which hopefully may lead to thoughts that the gardener does know what he is doing. Thank you to the trustees and garden volunteers who have helped me during the past 10 + years in making the garden the jewel it now is, and leaving such a solid foundation for the next gardener to move forward with.

I won’t miss the traffic on Elstree Road, the various local residents groups whose sole purpose is to block any attempt by the trustees to secure the long term future of Reveley Lodge and the often asked and the most irritating visitor question ‘are you the lucky person that works here?’

Having an ever growing record collection consisting of every disc and cd I have ever bought, the blog title track comes from the very first album I ever bought in 1965 – The Beatles Rubber Soul – on vinyl of course – and in glorious mono as it should be heard. I am unconvinced that with age comes wisdom but I do know that some of my favourite wine improves by lying on its side in a cool dark place so I’m off to try that. Take care and Goodbye. 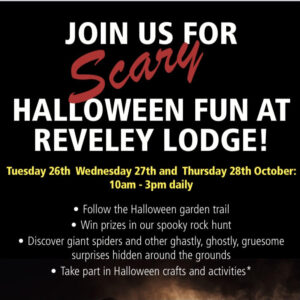 Join us for half term Halloween fun at Reveley Lodge.
Book now >